Zen and the Master in the Art of Living

Inspirational quotes often strike a chord deep within us and can serve to encourage us through a particular phase in our life. The quote below has been with me throughout my career, and sums up my approach to life. 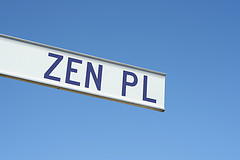 photo credit: Johan Larsson
The Master in the Art of Living
The master in the art of living makes little distinction between his work and his play, his labor and his leisure, his mind and his body, his education and his recreation, his love and his religion. He hardly knows which is which. He simply pursues his vision of excellence at whatever he does, leaving others to decide whether he is working or playing. To him he is always doing both.
From the Zen Buddhist text (well, so I used to think…..)

Despite its attribution to the Zen Masters, it would appear that a teacher and Unitarian minister called Lawrence Pearsall Jacks (AKA L. P. Jacks) wrote it in the 1930’s (not the Pulitzer Prize winner, James A. Michener as widely believed).

So – whilst I was dissapointed when I realised it was not a quote from an old Zen text, the intention remains the same, and still sums up my approach to life.

What quote(s) has inspired you – and why?